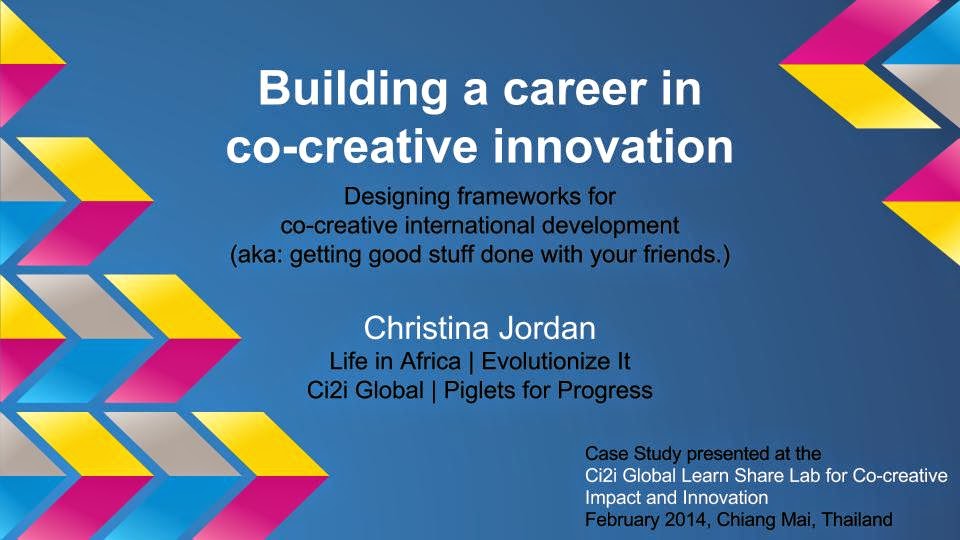 Soon to be online at Ci2i Global, I've written about the work I've been doing for the past several years as a case study. Click the image above to see the presentation I gave about it. The text below appeared in a booklet of case study background information which participants at Ci2i Global's Learn/Share Lab for Co-creative Impact and Innovation also received earlier this month.

Ci2i Global Founder Christina Jordan’s career as a serial social entrepreneur in international development has spanned several continents, online spaces, container organizations and initiatives to impact globally marginalized local communities since 1999. She is also a passionate activist for collaborative professional development in the global changemaker space. More than looking at the background and impact of any of those individually, this case attempts to capture the evolution of an approach to professional career development that models, applies and supports co-creative approaches toward a desired shift in prevailing global development paradigms.

New Life in Africa (Kampala, Uganda) is a community based organization of mostly war-affected displaced women who live/work at a stone quarry. The CBO devolved in 2008 out of the former Life in Africa Foundation, which Christina originally founded in 1999.
Evolutionize It, ASBL (Belgium) was established in 2010 as a non-profit container that applies collaborative / co-creative skills developed in Africa to professional event design and facilitation assignments, while also enabling continued co-creative pro-bono work with New LiA and other groups.
Ci2i Global was initiated as a support platform concept for social entrepreneurs in professional transition, and has evolved through the co-creative input of like-minded colleagues into a platform for the study/promotion/uplift of co-creative approaches, and support to professionals who design and employ them.
Pigletsforprogress (Mae Sot, Thailand)  is an application of lessons learned in co-creative impact to a context similar to Uganda (Burmese migrants/refugees who live and work at a trash dump in Thailand)
Hundreds of online supporters have participated in unique frameworks for micro-giving and engaging in making a meaningful impact that Christina has designed through the above.
Hundreds of families in marginalized communities have directly experienced the impact of evolutions in Christina’s career toward inclusive co-creative development models.
More than a thousand changemakers have participated in event experiences that Christina has designed.

Modeling for targeted local impact: Christina’s approach to working with marginalized local communities begins with co-creative dialogue and events designed to unearth  community needs and self-perceived potential, in order to develop plans that can be “packaged” into unique opportunities for global supporters to engage around. An initially curated process for emergent outcomes thus shifts to an open process that invites co-creative global input in achieving the desired outcomes determined by the local community. As much agency as possible is left with the local community to implement their plans using inputs crowdsourced through Christina’s global networks.

Nurturing replication/spread for global impact: Christina’s work in the global professional changemakers space uses art-of-hosting facilitation techniques and learning event/experience design to invite & nurture collaborative learning, co-creative planning and community building to support others who are actively engaged in shifting international development paradigms from top down to bottom up.